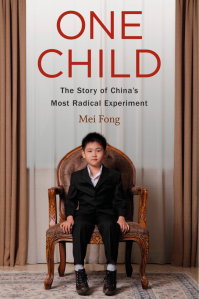 I’ve been wanting to read One Child by Mei Fong for awhile. It finally came available at my local library so I picked it up to read on vacation. I thought this was a solid book which touched on many topics of life in China today which are related, but are typically treated separately. Fong has lived in China for many years, and the amount of interviews she included to illustrate the points really helps you to see what it is like to live this as a Chinese citizen.

Fong discusses the development of the “one child” policy. She was able to interview both people involved in developing it, as well as people who were publicly opposed at the time. She spent some time discussing a campaign to convince citizens to voluntarily reduce the number of children they choose to have. She felt this was more effective than the one child policy would eventually become. It is generally accepted that as a country achieves industrialization and education rates rise, there is a corresponding drop in birth rates. I think it’s likely that this preliminary push to reduce birth rates fell at the same time that China reached this industrialization/education point, so it might not have been the campaign alone. Fong also discusses why she feels the birth rate will not increase despite the lifting of the family planning regulations. For many married couples who are both only children, the responsibility of caring for four aged parents in the future causes them to feel they cannot take on the financial burden of a second child, too.

Fong examines the sacrifices that parents make in order to have their only child be successful in life. This puts an enormous pressure on the child. It also causes the parents to feel some amount of ownership over the child’s life as an adult. For example, the pressure to marry soon after graduation from schooling. Being of Chinese heritage herself, Fong does a good job putting all of this into context of the culture views of filial piety. She also includes sections on the migration of young people of fertile age for jobs, and how the grandparents often end up parenting their children. She looks at the lives of parents whose only child died past the point where they could have another child and how not having a child to care for them could impact their future welfare.

Difficult topics like the means used by the government to enforce the one child policy, such as forced abortions or sterilizations, are discussed by Fong in depth. When discussing the disadvantage that uneducated men have in the marriage market, she travels to one such town. Trafficking women to be sold as wives has become a problem in rural areas like this, but she also encounters a pair of men who were swindled by women who agreed to marry them for a very high bride price but ran away with the money soon after the weeding.

There is a chapter on adoption in China which was mostly accurate. Fong feels that she was an unwanted daughter in a family which highly values males, so I don’t feel she touched on the fact that boys are also available for adoption, nor does she really recognize that in urban areas girls are become preferred because boys are so expensive. She juxtaposes the China adoption program with the skyrocketing infertility rate in China, looking at infertility treatments which are available there. She quipped that there are more wealthy Chinese couples traveling to American for babies (through infertility treatments or surrogacy) than there are American couples traveling to China to adopt. Considering the steep decline in international adoption, I think that’s likely true.