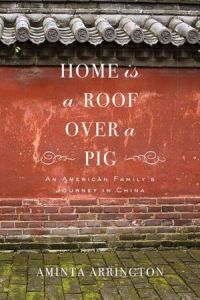 One book which I have seen recommended several times in the Chinese adoption groups is Home is a Roof Over a Pig by Aminta Arrington. I picked it up at my local library. It turned out to be one of my favorite reads in this genre. Aminta writes about how she and her husband decided to adopt a daughter from China after having their first child, a daughter. While they were waiting, they had a son. In 2003, they received the referral for their daughter from China. A few years later, they decided to move to China. Arrington’s book is a memoir of their first two years in China.

This is really a combination of what I liked best about Dreaming in Chinese (my review here) and Awakening East (my review here). Like Dreaming in Chinese, Aminta shares how her quest to learn the Chinese language helps her to better understand the Chinese people and culture. The title refers to the Chinese character for home, which is a roof over the character for pig. Learning the Chinese language, especially the characters, gives her insights into her host culture. Amina is also very interested in the Chinese educational system. She teaches university students English at the same time that her three young children are being immersed in the educational system at a local Chinese kindergarten. She shares the strengths and weaknesses that she observes as both a teacher and parent. The Arrington family continued to live in China for many years. I couldn’t help but marvel at the wonderful opportunity it was for her children to become bilingual by moving there at just the right time for them to begin in primary school.

Aminta is a keen observer, both of others and within her own family. She narrates the process of acclimating to the foreign culture. She honestly describes a time when she and her husband realized they had somehow taken the habit of using the adjective “Chinese” in a negative way, as well as their awareness of how it might impact their daughter adopted from China. Throughout the book she relates Chinese cultural habits in a way that always treats them with respect and humanity, unlike other “I lived in China” memoirs which can slip too easily into “Let me tell you how crazy everyone here is.” There are plenty of humorous stories included. 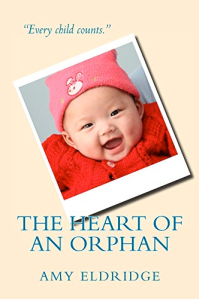 The other China related book I read during my break was The Heart of an Orphan by Amy Eldridge, founder of Love Without Boundaries. I absolutely loved this book. However, I can’t say that I couldn’t put it down because I couldn’t read more than a couple of chapters without needing a break. Amy’s book is basically a collection of stories about children she has known through her work with Love Without Boundaries. It’s the heartrending emotional rollercoaster that you would expect.

Each chapter also tells some part of Amy’s story of how Love Without Boundaries grew, but also her personal growth. I really appreciated her nuanced discussion of sensitive topics. She discusses how her view of parents who abandon their children changed as she worked to provide surgeries for children still in their birth families. How she came to recognize the adoptive parent preference for girls as she saw, over time, how the orphanages were filling up with boys but families did not step forward as quickly to adopt them. She even acknowledges the challenges of older child adoption while discussing the plight of children who reach the age where they are no longer eligible for adoption.

I feel a little odd in writing such a short review for a book I want to rave about. It’s simply that it’s hard to describe it in the way it deserves. I think that Eldridge’s memoir, along with Jenny Bowan’s (of Onesky/Half the Sky) Wish You Happy Forever, should be required reading for those in the China adoption program. They are both far more relevant for families in the current process than the frequently recommended Silent Tears.