Summer is here and I have been stocking up on summer reading. I have recently read two rather depressing books by Chinese authors which were considered subversive by the Chinese government. 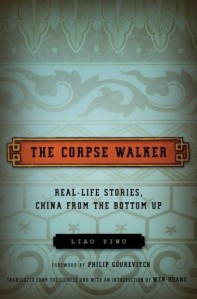 The Corpse Walker by Liao Yiwu is a collection of interviews with people who are considered the bottom of society. They are all people who have run afoul of the Chinese government in some way or another. This is gritty China, where you can’t trust anyone or establish a stable home. Some of these people have chosen to take a courageous stand, some have made peace with their lot, and others are despicable characters who deserve what they get. I will be frank that I found each of the stories disturbing in some way. It took me awhile to read because I couldn’t read more than two or three interviews at a time. I also couldn’t put it down because it was so raw.

“My music is devoid of tenderness or love…Some sissy artists used to say that love is everything. That’s total bullsh*t. When your right to live is being threatened, where do you get love? On June 4, 1989, when soldiers opened fire at students and residents, one thousands shouts of love couldn’t even stop a single bullet.”

“Those muddy-legged peasants are running faster than us. They go to faraway places in droves to search for better opportunities…Some of them are running businesses; others are working at odd jobs. No matter what they do and how well they do, they share one common aspiration: to get the hell out of the countryside.”

“Times have changed. Everyone talks about money and nobody cares about Communism anymore.”

The book also illustrates the everyday nature of Chinese folk beliefs. The title comes from the practice of hiring someone to transport a body back to the person’s ancestral home for burial. Over time the rumor sprang up that these “corpse walkers” could enchant the corpse to walk with them on their journey. Two different interviews regarding corpse walkers are included. Another story involves a man matter of factly recounting that his wife was enchanted by the spirit of the dragon. The village burned her alive to “help” the man out with this problem. He then was expected to provide a feast for the villagers to thank them for this service.

The Dream of Ding Village by Yan Lianke is a novel which tells the story of one village of Henan going through the boom and bust cycle of the blood selling scandal and the AIDS aftermath which followed. While Yan’s characters are somewhat two dimensional, he does a good job of showing how the greed of the villagers got out of hand while at the same time showing that they were merely objects to be exploited by those with power. In many ways the story has an apocalyptic feel. This is the end of the world for the majority of the village. How do you live when almost everyone you know will die? The short-sightedness of actions like cutting down all the trees in the village to build coffins or stealing all of the furniture from the school are selfish but also show a group of people who cannot envision any future for themselves.

An interesting custom involving “ghost marriage” becomes part of the plot in the later part of the novel. With so many young unmarried people dying, the villagers begin to seek matches among the dead. The two young people would be married after their death. Now buried together, they will no longer be lonely in the afterlife.

This book is good for anyone interested in the background of how the AIDS crisis in China began. I also know many families who have adopted from Henan province. This book would provide a look at village life on the central China plains.