Now that August has been home for three months, things feel like they are more settled. August is generally happy, bossy, and playful. He is strongly attached to me, to the point that he expresses separation anxiety if I move too far away from him.  However, he is starting to show an attachment to Matt. Unlike Leo’s experience with me, August never disliked Matt. He was simply indifferent to him. Now he asks about Papa when he is at work and will interact with him once he’s home. August loves his siblings and has definite preferences there, too. He will often chant “Vincent, Gregor, Max,” his three favorites. He will play with Leo, but as Leo is closest in age, he is the competition. He holds Mary Evelyn at a distance. Perhaps because she likes to mother the youngest boys, he sees her as trying to take my place.

August’s activity level has calmed down somewhat. His first two months, he was constantly climbing up on furniture to jump down, running everywhere, and non-stop action. With the warmer weather, we have been making regular visits to the playground. I think that the nannies must have tried to restrain him from exploring because of his leg, so we were getting a bit of the animal-let-out-of-a-cage effect. It’s also possible that he’s understanding our house rules a little better. I try to make sure he has a little bit of outside time daily and give him ways to let out some energy. His tantrums have really tapered off. He is still short-tempered, but feeling secure and being able to express himself has really made things more peaceful around here. Well, not actually anywhere near peaceful, but there’s a lot less screaming.

August’s verbal development has really exploded this month. He is in the stage where he parrots anything anyone says. This can be comical when he repeats Leo, who still cannot say most consonants. Leo has taught August to say “uh uh uh uh oo oo” (chugga chugga choo choo) when he sees a train. He is now putting together three and four word sentences independently, instead of only using phrases that we say to him regularly. His Chinese is now mostly gone. The last hold outs are “hen hao” for very good, and “guo guo” for doggy or any animal. He is equally likely to call any dog or animal Pudgy, after our pug. Max has been practicing the Imperial March from Star Wars for a band concert. It seems to have gotten stuck in August’s head, because he wanders around humming it for a good portion of every day.

We have been out and about more this past month. Some good friends came up to visit.

August was outgoing and friendly with them, but still showed a preferential attachment to us. We visited the local children’s science museum where he enjoyed playing in the water and riding on a car. Last week we went to the zoo for the first time. He thought it was the greatest thing. August was happy to look at every animal we stopped to see. When we moved on, he would clap and say “More guo-guo! More Pudgy!” When we stopped to see the gorillas, he was thrilled to see one drinking water. “Ma, Pudgy drink wa-der!” Our zoo is really large, so we only saw a fraction of the offerings. We’re looking forward to taking more trips over the summer since loved it so much.

We have finally finished making the rounds of medical visits. There were no surprises–his health is the same as was represented in his file. He is a very healthy boy with a complex leg malformation. While August has been walking fine on his own, he recently stopped walking. It seems likely that his recent growth spurt has caused his shorter leg to now be too short for him to comfortably walk on. His leg issues will eventually be corrected surgically, but for now we have gotten him a walker to help him maintain his mobility. Ever uncooperative, August refused to stand up at the medical equipment supply store but once we got him home, he took to the walker immediately. We have a lot of stairs in our house, so he still does a lot of scooting. It will be very useful as he grows too heavy for us to carry and as he gets older and more independent. 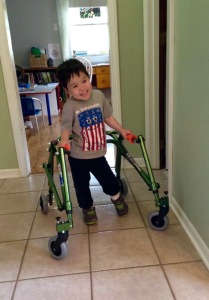