When I last left off we were going to the Pearl River cruise. In the end, we decided that Matt should stay home with August because we weren’t sure how well he would do in the evening. Vincent and I went with the other families in our group. Guangzhou is home to the Canton tower which I think was the tallest TV tower in the world for a short time. The night River cruise is a popular attraction because so many of the bridges and buildings along the river are covered with decorative lights. The food on the cruise is notoriously um, adventurous so our agency has the tradition of ordering Papa John’s to be delivered to the boat right before launch. Vincent and I shared the pizza. It was the first American food we’ve had on the trip besides the McDonald’s at the airport. The weather was great for the trip and the scenery was beautiful. The cruise also included a woman playing a traditional Chinese instrument. 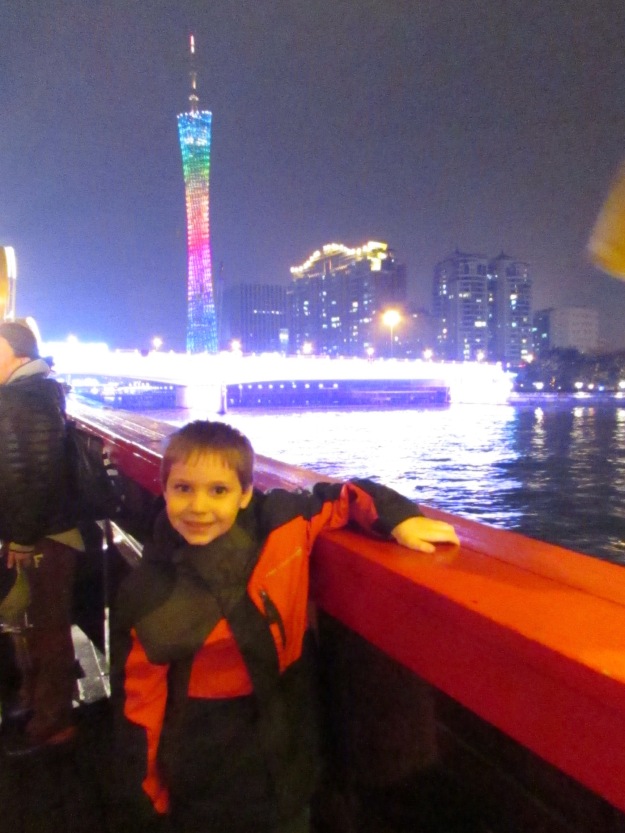 We had to be up early today for our appointment at the US consulate which is the entire reason for our weeklong stay in Guangzhou. The consulate in Guangzhou is the only consulate in China which processes the immigrant visas for children adopted by US families which will bestow citizenship upon entry to the US.  Our visit with Leo was uneventful but this trip was more high stress. First, we were the only family with our agency who had a Wednesday appointment. Our agency was able to arrange for us to ride with some families with a different agency who were staying at the same hotel. I had been talking to a friend with that agency who told me that the meeting time in the lobby was earlier than my agency facilitator had told us. We showed up at the earlier time but no one from our agency was there with our paperwork. Matt went to try and track down our paperwork while I talked to the big agency group. Their agency facilitator said she wasn’t aware of any of this then promptly loaded up the van and left without us! Fortunately Matt showed up at this point with our agency person and the paperwork. The group which had left was NOT the one we were supposed to ride with so all was well. 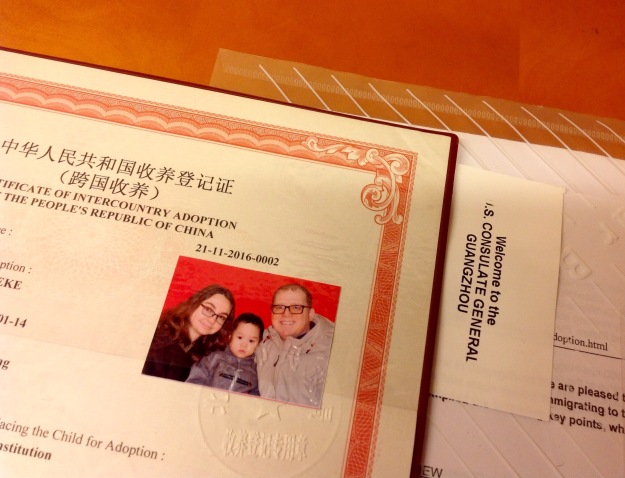 I have no pictures from the consulate because cameras and cell phones are on the long list of items you aren’t allowed to take. When you come to the front of the consulate there is a huge crowd of people. A long line of them are waiting to try and enter while others are there waiting for friends or family trying to enter. As a US citizen you get to walk right in past everyone waiting. It makes you keenly aware of the privilege you have. After we got inside there was another long wait as everyone’s paperwork was processed. We took an oath that nothing in our paperwork was falsified then the details of immigration at the port of entry were gone over. Finally it was time for individual interviews. When it was almost our turn a woman came in who had apparently had a paperwork issue. She thought she had corrected it but she was told it was not corrected. She burst into tears and left. Then the people immediately in front of us had their adoption certificate scrutinized. The consulate officer was holding it up to the light and frowning. Apparently he decided it was legit but I was biting my nails over our outcome by this point. We had an uneventful interview so we should have August’s visa tomorrow. The woman who had such a problem was able to get it resolved and she rode back to the hotel with us. Happy ending all around! 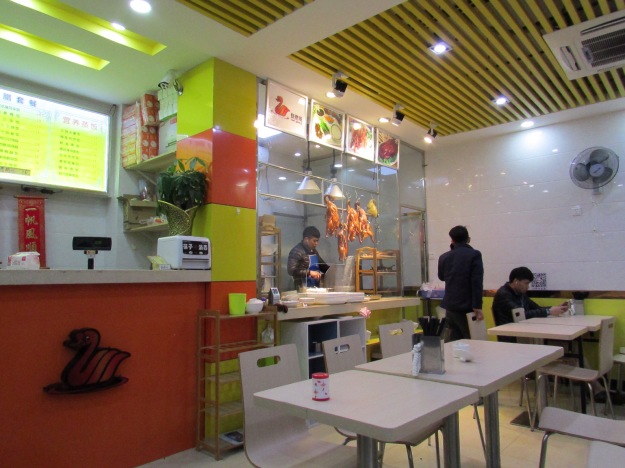 It was well after noon when we returned to the hotel. We fed August and got him down for a nap. Matt got takeout from the noodle place. I think I will have eaten my weight in cumin beef noodles by the end of the week. We were so worn out by the long morning that we didn’t do much in the evening. It’s rainy here too, so not the best weather for walking in the park. We met the other families in our travel group up in the lobby for a group photo. Afterwards we walked across the street to buy a roasted duck. Well, half of a roasted duck. We kept seeing the happy roasted duck restaurant sign on our walks and couldn’t resist trying it. They didn’t have an English menu but the guy at the counter spoke English. We were happily surprised that August loved the duck. He kept yelling for more every time he thought we were going to stop feeding him.

August was talking up a storm after our visit to the safari park. I recorded about a minute of video of him pointing to the park map and talking nonstop. I asked one of our guides to watch it so he could translate. He said that other than “push the stroller” he couldn’t understand any of it. He said it was just baby talk. He does use some Mandarin phrases regularly. His favorite is “Yao bu yao” which means literally “want? not want?” Sometimes he will use it in context such as by grabbing something out of the suitcase and asking us if we want it or not. Other times it’s more of a rallying cry. We kind of wonder if he thinks it’s the only intelligible thing we can say.

Since I don’t have any more interesting things to write I will close out with a picture of the infamous macaron Christmas tree from the breakfast buffet. Now missing one pink macaron from the bottom row.