After our very long excursion yesterday we all slept in this morning. We went down to breakfast where August again would only eat yogurt and broth. We went back to the room for about half an hour. August wasn’t happy so we decided to go out for a walk. We went to Yuexiu Park again. Over the weekend they had put up a big spring festival decorative entrance. Decorations aren’t quite everywhere but people are definitely getting ready for the year of the monkey. 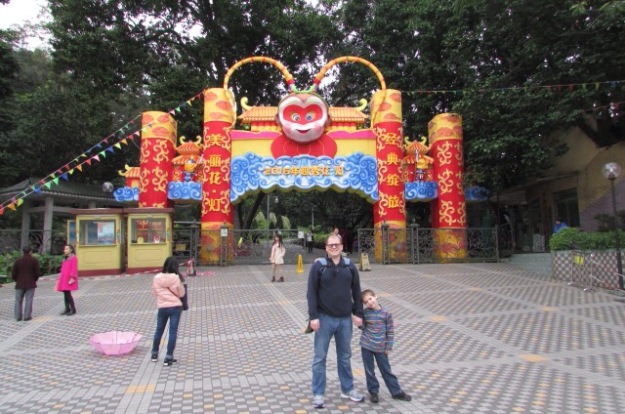 We walked around the park for a bit but were caught by a pop up shower as we were approaching the Ming dynasty era city wall. I remembered that there was supposed to be a museum in the Zhenhai tower just a little way up the hill. We walked up and saw that the entrance fee was only going to run us $2.50. Sounded like a great way to get out of the rain!

The tower is a 5 story structure. According to the museum it is one of the four most famous such towers in China but I can’t say that we’ve heard of any of them. This one dates back to the 1600s but was remodeled to become the Guangzhou museum in recent decades. It was used as a military stronghold at several points in the past so there were cannons displayed in the front lawn.

The first floor of the museum contained displays about the origin myth of Guangzhou, a story involving 5 deities/fairies who landed in this area on goats to bless Canton with a good climate and plentiful harvest. As you went up each story you traveled forward through the eras. The top floor involved the modern era with Guangzhou’s involvement in western culture. You could also walk out onto the balcony to admire the view. The two points which stuck out most strongly from the museum are that the Cantonese are very proud of their long history of involvement with the West and the Chinese are still very sore about the Opium wars.

August was starting to get unhappy by the end of the trip so we headed back to the hotel. The afternoon has been pretty low key. I attended an exit meeting with our agency representatives and Matt took the boys to the hotel garden/playground. This evening we will be going on the Pearl River cruise to admire the lights and architecture in downtown Guangzhou. It will be late when we return and we leave for the American consulate tomorrow morning so I decided to write this entry early.

Just as a reminder, I’m posting additional photos on the Flickr site. If you receive the blog entries through a subscription service then you will need to visit the blog page then click through the Flickr widget in the upper right hand corner of the page.