Today the jet lag seemed to hit us pretty hard. You’d think we’d be really settled into China time but instead we were all ready for bed at noon. It seemed much more like midnight. Vincent was not his usual self and he joined us in nap time. Although we made plans a few different times, in the end we didn’t venture much past the hotel.

After breakfast we visited the park next door in an effort to stay awake until nap time. Yes, I know we took the picture on the wrong side of the goat statue. There was a long line on the right side of the goat statue. Anyway, it has finally stopped raining. It was a gorgeous day, like April back home. Sunny and a nice cool breeze. After a nice walk we headed back to the hotel for the middle part of the day.

We then went out for a late lunch/early supper at the same noodle shop where we ate yesterday. It was close and tasty. At that point we decided that we just weren’t feeling up to the trip we had planned. Instead we headed down the street to pick up the birthday cake we had ordered for Vincent and August yesterday. On our way back in to the hotel we picked up the train tickets to Hong Kong for Friday. In the afternoon we spent some time watching Netflix. We also visited the garden within the hotel. There is a small play area, plus a waterfall leading to a small stream. Vincent really liked it, telling me we needed to take some pictures there. He ran a few laps around. Even August asked to get out of his stroller. Holding my hand he lead me all around the garden a few times. 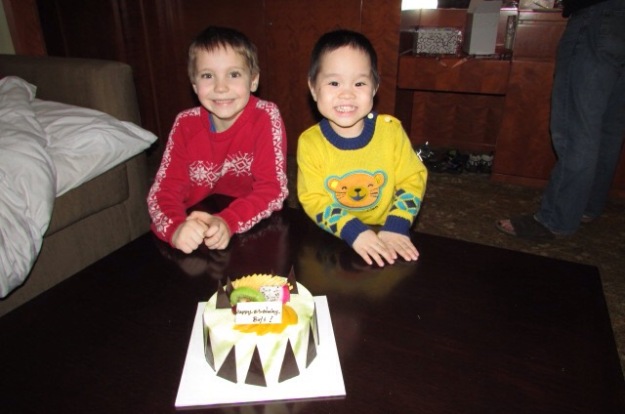 Then it was back to the room for cake time. Although August’s orphanage doesn’t allow parents to send cakes, he did seem familiar with cake. That is the most sincere smile I’ve seen from him! He kept saying little brother, I guess because he was afraid only big brother would get the cake. He ate almost all the apple slices off the top although we haven’t been able to get him to eat any fruit before now. He really enjoyed the cake. We all enjoyed the cake, except we wished we could be all sharing it as a family. Sorry Mary Evelyn, Max, Gregory, and Leo that you only get to see the picture!

August had a harder day in some respects. He has been yelling at us more and throwing tantrums. It’s a positive development compared to his default of withdrawal. Three is a challenging age, but he’s more than entitled to feel angry about the situation. He wasn’t given any choice in the matter nor does he understand what is happening. It’s good that he feels safe enough to let his feelings out. On the other hand, he wanted to snuggle with me after his bath tonight. I think the cake created a lot of goodwill. I chatted with him, saying I love you in Chinese. He parroted it back to me in the tiniest whisper possible! I got him to say that he loved Papa and older brother the same way. I don’t know if he understands that either, but it was still a wonderful moment for us.

2 thoughts on “Sunday in Guangzhou”