Yesterday was a long day. It seems like taking a single domestic flight shouldn’t be that much effort but every time it takes an entire day. We had breakfast, checked out of the hotel, and headed to the van. Another hour long ride to the airport. The pollution index was high but we skipped the masks since we were going to be in the van or airport the whole time. I could still feel slight symptoms, though. 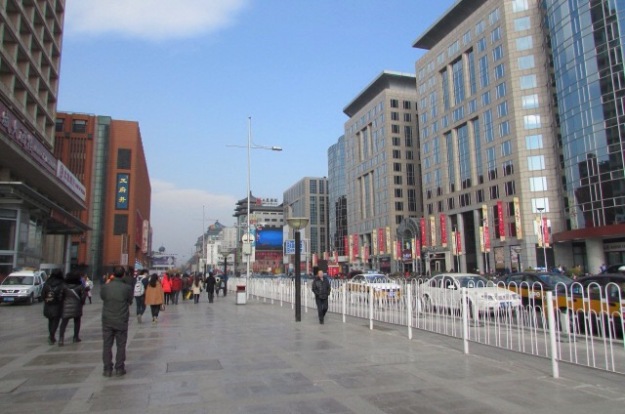 At the airport our guide got us checked in but had to send us into the security checkpoint alone. Our security person seemed unfamiliar with the process of using an adoption certificate rather than a passport. The female guards on either side of him alternated between making faces and cooing over August and teasing him about not knowing how to process us. He kept counting the 4 plane tickets and three passports and scratching his head over what to do. I kept glancing back at our guide who seemed increasingly worried at how long it was taking. Eventually the female guards had pity on our guy and walked him through the process. I waved at our guide and we headed to the security screening station.

Security screening turned into another ordeal. Our guide had been concerned that the bottle of milk for August would be a problem but they only shrugged at us over that. They wanted August to walk through the metal detector by himself. I set him down and he took a tentative step. Once the guards saw that he had trouble walking they came over and carried him through. A female guard held him, speaking to him soothingly while the male guard gave him a tiny pat down. We got through the pat down and wand part okay but then got called over to the metal detector for our bags. Every country has different requirements. They didn’t care about our liquids but we didn’t take as many electronic devices out as we were supposed to. We tried to put out everything that was on the sign but the language barrier still makes it difficult. Anyway, I had forgotten to take out Vincent’s DS. I took that out and they ran it through again but it was still beeping. The guards started pulling e very thing out. It was all kid stuff–plastic slinky, stuffed animal, blanket, etc. They were rolling their eyes at how much trouble they were having over a bag that was clearly not a real security threat. They ran it through the metal detector at least 3 times. I’m not sure if they ever figured out what was causing the trouble or if they gave up because they were tired of dealing with us. 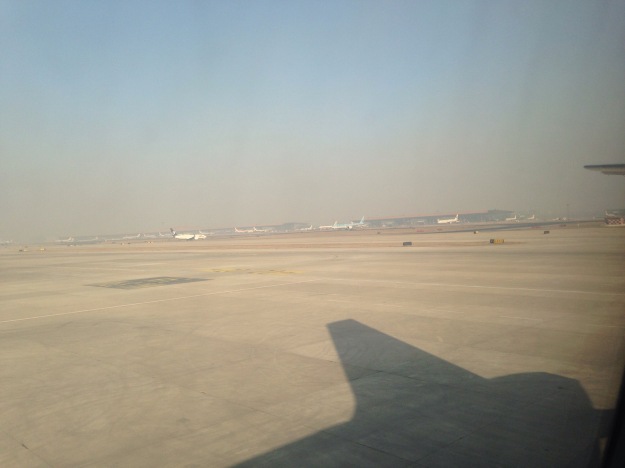 We grabbed some food at McDonald’s (mm, tastes like America!) before our flight.  They were advertising a red bean paste pie for the new year with cute little fuzzy monkeys. If we eat at the McDs in Guangzhou then I’ll try to get a picture. I don’t take pictures in the airport because of all the security. I did try to get a picture of the airport for you from the plane. They have the skylights arranged on the roof so that the airport looks like a long dragon with spikes on top. Unfortunately, as you can see, the pollution is so bad that you can’t see it at all in the picture.
Once we landed in Guangzhou it was another 2 hours before we finally made it to our new hotel because of the traffic. We were so exhausted that we went straight to bed rather than updating anything. We did all sleep very well. Vincent was looking forward to the breakfast buffet this morning. I had told him about a doughnut tree they had last time where doughnuts were hanging from the branches. It wasn’t there this home but they had a Christmas tree made of colorful macarons in it’s place. Vincent lost no time in plucking one for his plate. It wasn’t until I went by to get myself food later that I saw the “For display only” sign. Oops. When a waitress came by to ask if we wanted coffee I noticed her give the macaroon and Vincent a side eye glance. I’m sure that’s not the only time a child has made off with part of the Christmas tree, right?