I’ve noticed that there is a strict divide in the adoption blogs I read.  Those written by non-religious parents often write much more about race, culture, and attachment.  Those written by evangelical Christian adoptive parents talk often about how adoption perfectly model’s God’s redemptive plan for us, a little bit about attachment and culture, and are generally silent on race.  The former are more likely to have read some books or essays from the point of view of an adult adoptee, but really, if you read any adoption blog you’d think that interracial adoption is a fairly recent phenomenon. 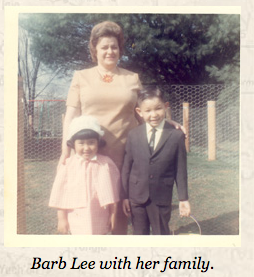 International adoption began after the Korean War.  Anyone remember when that took place?  Let me give you a hint, long enough that there are people who are adopting through my agency who are themselves Korean adoptees.  Adult adoptees grew up to share their experiences, and they have highly influenced the required education that today’s adoptive parents receive.  It is because of them that social workers stress the importance of trying to keep an adoptee in touch with their cultural heritage.  Adoptees such as Barb Lee, who directed the documentary Adopted, which she co-produced with another adult adoptee.  I watched Adopted on Amazon, but you can view the entire movie on YouTube here.  It was a very uncomfortable documentary to watch, and I assume that is why most adoptive parents prefer to pretend that adult adoptees don’t exist.  We don’t like to feel uncomfortable, and we don’t want to think that our children could grow up with any negative, or even conflicted, feelings about their adoption.

Adopted follows 30-something year old Jennifer Fero, who was adopted from Korea.  When she learned that her (adoptive) mother has terminal brain cancer, it spurs her to seek the relationship with her parents that she has been tip-toeing around for years.  Jen falls into the stereotype of an “angry adoptee.”  I remember hearing Steve Kalb say in an interview that if you’ve met one adoptee then you know one adoptee.  Jen’s feelings are common for some adoptees.  Other adoptees will go through life never struggling with these issues.

On Jen’s visits back home, she repeatedly pushes her parents beyond their comfort zone.  When Jen asks her mother why she thinks Jen’s birth mother left her at the police station, her mother immediately answers “Some people just aren’t meant to be mothers.”  Jen challenges her to think about more possibilities, what if she wanted to keep Jen but couldn’t because of poverty.  Jen’s mom plays along for a minute or two but then abruptly shuts down the conversation with “I don’t think about her at all.  I don’t want to think about her.  You’re my daughter now, not hers.”

Jen’s father tells the story of how they decided to adopt her.  He said that after having a son, they tried for a few years to have another child.  When that didn’t work out, “I said we should go get a baby girl from Holt, the adoption agency here in Oregon.”  Just like ordering up a product.  Later in the documentary, Jen goes on a trip to New York with her father and uncle because her father is very interested in genealogy.  Jen proudly explains to her father that because of his research he is eligible to join the Sons of the Revolution because he is a direct descendent of a man who fought in the Revolutionary War.  Moments later in the film, the man at the Son of the Revolution museum explains that only Jen’s father’s “linear children” are eligible to join.  As Jen’s father clearly isn’t catching his meaning, he is forced to explicitly state “only your biological children are eligible, not adopted children.”  Jen politely smiles and follows along on the tour but later ducks out to wipe away her tears.

with her mother’s terminal diagnosis.  They try really hard to understand Jen’s feelings, but clearly none of it makes sense to them.  Jen’s older brother, who seemed to be the hero of the film to me, lives with his parents to take care of them.  He is eternally patient with Jen, always validating her feelings while trying to gently suggest that she be a little easier on their parents because of their age.  Frankly, while I could understand all of Jen’s feelings, I didn’t like her much.  It was extremely painful to watch her railing about her feelings to her mother, knowing this was her last few months of life.  While I wouldn’t have chosen that moment to suddenly spring an adoptive parent educational course on them, I think today’s adoptive parents would benefit from listening to Jenn and other adoptees.

During the New York trip, Jen drags her father and uncle to eat at a Korean restaurant.  They are clearly unhappy about being there, and it is painful to watch.  At another point in the movie we see Jen telling him that it isn’t fair that she has to make all of the accommodations.  She has to be white.  Despite the fact that he has chosen to have an interracial family, there is no acknowledgement that she is Asian.  She must always adapt to them, they won’t do any adapting to her.  The fact that is family his interracial is clearly news to Jen’s dad.  Throughout the film, both he and his wife make statements typical for people of their age.  “I never see Jenn as Asian–she’s just my daughter” or “I was taught to never see race.”

As I watched Jen’s dad and uncle sit sullenly picking at their Korean food, I was reminded of a fairly recent conversation I had with another adoptive parent.  When we moved to a larger city, my husband learned from from a Chinese-American coworker about a Chinese school in the area.  Founded by Chinese immigrants for their children, it offers a variety of classes in Chinese language, dance, martial arts, and music.  When I met another parent of a Chinese adoptee, I asked if she had heard about the school.  She responded that all of the adoptive parents in the area put their kids in language class with a white guy who has a college degree in Chinese.  She felt it was really great because their daughters were able to be friends with other adoptees and the parents can all talk while their children are in class.

I think it’s wonderful for adoptees to have friends who are also adoptees, but I reflected that the Chinese school was a great opportunity for a Chinese adoptee to become a part of the Chinese community in our city.  We ended up signing up Vincent (who is not adopted) for Chinese language classes.  At the Chinese New Year celebration our family one of a handful of non-Chinese.  The building was full of Chinese people, speaking Mandarin and eating Chinese food.  My daughter commented that it was like being back in China again.  I wondered if the adoptive parents avoided the school for just this occasion.  When you realize you don’t belong and that you’re the one who is different.  I had a sudden flash of sympathy for the one black kid who attended school with me in the rural area where I grew up.  This is what so many of us ask of our adopted children–to be the only non-white person in the area, while trying to avoid being in that situation ourselves.  I always appreciate the opportunity to connect with other adoptive parents, but there is something to be said for the opportunity to connect with Chinese-Americans as well.

Right after watching Adopted, I watched Approved For Adoption, a film by Jung, a Belgian- 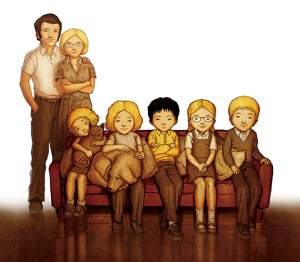 Korean adoptee.  I believe this movie is currently only available on Amazon.  Approved For Adoption is Jung’s memoir, mostly in cartoon form although there are home movies and video footage from his trip to Korea interspersed.  It is in French with English subtitles and it is a little European-earthy with some PG-13 moments.

Jung is much more personable than Jennifer and I think the cartoon format makes this film more approachable for the adoptive parent than the documentary format of Adopted.  Yet, Jung’s story has many of the same themes.  He talks about how he shunned the other Korean adoptees in the village and resented his Korean sister because he didn’t want to face being Korean.  In one humorous episode, he becomes obsessed with Japanese culture and starts to pretend he is Japanese.  Because he was older when he was adopted and had lived on the streets for a time, he acts out in many ways common to children from that scenario.  This causes friction with his adoptive family.  Towards the end he discusses the depression and self-destructive behavior common among adoptees.

I think many adoptive parents avoid listening anything by the “angry adoptees” because we don’t want to deal with the uncomfortable feelings that come from listening to their point of view.  Adoptive parents love “Gotcha Day” because that was the day that WE got our child.  But some adoptees think of it as the day they lost their culture.  They don’t want to be told that they should be grateful they didn’t grow up in an orphanage.  Surely you can love your family while still feeling that it’s unfair you couldn’t grown up with your first family in your country of birth.  Humans are complicated–we can feel all sorts of conflicting emotions.  We need to be prepared to support our children throughout their lives, and even when their feelings make us uncomfortable.  If you avoid adult adoptees because you think that they only feel that way because their parents did it all wrong raising them, so your kids are never going to have those feelings then you will be completely unprepared if you one day find yourself in that place.