Like many adoptive parents, I have become very interested in learning about Leo’s birth country.  I want to know more about China’s history and what life is like there.  I’ve found a lot of great resources and I decided I wanted to compile them in a post for others who might be interested.  I’m including books, online articles, and movies. I watched almost all of the movies online through Netflix, Amazon, or YouTube.  I plan to update the post periodically as I find new resources and if you have suggestions please leave a comment!

I am not an Amazon or any other affiliate, so if there are click through links they are to reviews or some sort of informational page.

Before you even get started, you might want to bookmark the Wikipedia page on Chinese pinyin.  It can be difficult to know how to pronounce Chinese names and words even if they’re written in Roman letters.  Everyone who adopts will spend some time in Guangzhou but you scratch your head when you realize it is pronounced gwan-jo rather than gwan-zoo.  Keep checking the pinyin chart and you’ll get it eventually.

China’s Lost Girls– This National Geographic special hosted by Lisa Ling aired in 2005 inspired many people to adopt a girl from China right at the time when there was a drop in the number of healthy baby girls available to adopt.

Message from an Unknown Chinese Mother by Xinran- If you want the back story on how those lost girls ended up at the orphanage, this is the book to read.  Xinran’s book is jaw-dropping and heart-rending, but keep in mind that she collected these stories over 20 years ago so they are not necessarily an accurate account of the situation in China today.

Somewhere Between– This documentary released in 2012 will show you where the lost girls are today.  It examines how three teenaged girls feel about their adoption.  It touches on the changes in adoption from China today through highlighting a young girl with cerebral palsy who is matched with a family.

The Changing Face of China’s Orphans– A must read series from Love Without Boundaries.

Another must-read by LWB.  Their newest newletter is fun of information on China’s domestic adoption program.  According to them, over 90% of the adoptions of Chinese children last year were domestic.  They include links to several other informative articles on the last page.  Notice that most of the featured children were girls, again showing that there is no universal Chinese preference for boys.

Wish You Happy Forever– Jenny Bowen, founder of Half the Sky, writes the story behind the charity.  Her experience adopting her daughter inspired her to change the way orphans were cared for in China, one child at a time.  She writes about the changes in orphan care and population throughout the book.  I was particularly shocked to read about the origin of the AIDS crisis in Henan, which I was unfamiliar with before reading the book.

The Blood of Yingzhou District is a documentary from 2006 which focuses on AIDS orphans in China.  It wasn’t the best documentary that I’ve ever seen, but at only 40 minutes it gives a good look at the stigma which is found in China, as well as the lack of medication available.  There is a follow-up to the documentary available for viewing on YouTube.

Some children from China who have not been abandoned are being made available for international adoption.

China’s interest in instituting a child welfare system modeled off the one in the US. “There are some 600,000 children whose parents are working in the city. Many parents have drug problems. China will need to address this problem eventually.”

Boy receives hukou after 13 years– Human interest story which touches not only on racial issues, but the informal domestic adoptions which can occur, and the difficulties involved in them. 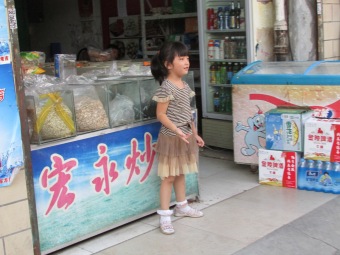 “Birth defects soar due to pollution”– China Daily, 2009  Since most abandonments today are due to birth defects, understanding the extent of the pollution damage is important.

Parents Abandon Children At the Guanzhou Baby Hatch– A photo essay which shows just how difficult it can be for parents who choose to abandon their children due to their medical needs.

“Family Planning Law and China’s Birth Control Situation”– People are more likely to credit the one child law to their child’s abandonment than pollution, but there isn’t really one universal law that applies to everyone of child-bearing age.  This interview is from 2002, and another change to the laws was made in 2013.

The second article directly above mentions the expense that boys bring to couples in modern China.  Both of our guides told us that couples would rather have a girl now because boys are too expensive and one expressed sympathy for a sibling and our driver because they had boys.  Our driver apparently worked two jobs because he and his wife will be expected to buy an apartment for their son if he is to marry.  This article discusses the expense involved in a man being considered financially stable enough to attract a wife.

How China’s Grieving Parents Are Creating a New Web Culture– An article discussing what happens when your one child has died and you are too old to have more children.

A Mother’s Ordeal– This book by Stephen Mosher tells the story of a woman sought political asylum from the US because she would have been forced to have an abortion.  Her husband was a student in the US at the time, but they already had a son.  Eventually she and her husband were able to become US citizens.  It also doubles as a memoir of the tumultuous time in China.  She experienced the great famine in her childhood, and the Cultural Revolution in her early adulthood.  She said that when she went to nursing school she spent half the time attending political meetings and “struggle sessions” then was sent out to work a farm because of her privileged student status.  Eventually her whole class was graduated without being taught much nursing at all.

Factory Girls– This book by Leslie Chang examines the life of the women who work as migrant workers.  While we tend to look at China’s factory workers as being exploited, Chang shows how desirable these jobs are for those who come from farming villages.  Chang includes a trip back home to visit the family of one of the factory girls.  (I was completely repulsed by the account of everyone taking a sponge bath by sharing the same bowl of water).  You get a very good idea of Chinese life.  One of my favorite quotes:  “As people entered the main [train] concourse, they instinctively broke into a run: Being Chinese has conditioned them to know that there will never be enough of anything.”

PBS’ The Last Train Home follows one family of migrant workers.  The parents have worked away from home for 15 years while grandparents have raised their two children.  Their teenage daughter is angry that her parents have never been there for her but also wants to quit school so that she can leave the small village of “old people and little kids” to join everyone else traveling to work in factories.

“Left-behind Children of China’s Migrant Works Bear Grown-up Burdens” considers what happens to the children back home when their parents keep working in factories.

Every 7th Person is a documentary about the farm villages which the migrants are leaving behind.  Of particular note is a scene where the population control officer comes to visit a woman who has just had her second daughter.  The officer congratulates her and reminds her that as soon as she gets sterilized they will be able to receive additional farm land.  This shows that in rural areas people may have a 2nd child if their first is a daughter as long as they wait a certain amount of time.  Also, the extra farm land used to only be given at the birth of a boy.  These changes were made by China as an effort to reduce the abandonment of girls in rural areas.

What It’s Like To Be Disabled in China– “To have a disabled child was to fail not only your family, but your country and your people.”  While we are far from discrimination and stigma free here in America, this is helpful in understanding why some children are abandoned.  Click on the author’s name to read several other interesting essays on Chinese culture.

River Town by Peter Hessler- An in depth look at life in Fuling, written after two years teaching English in the city.  An update on Fuling by Hessler in National Geographic.

Erma’s Wedding – Fluffy movie about a minority girl who falls in love with a Han majority teacher and wants to defy convention for a love match but then has a disagreement with him over the traditional wedding she prefers.  Beautiful setting and clothing as most of the movie takes place in a minority village that now operates as a tourist destination.  Favorite China moment:  when a woman complains about how hot she is and she is offered a cup of boiling water.  That happened to us.  I watched it on Amazon’s streaming movie platform.

Wild China is a series which explores the rural areas of China.  Although primarily concerned with the animals and habitats of China, it was very interesting to see the many minority tribes featured.  Our family favorite was the tribe which traveled by zip line to the local market.

And to balance out both the migrant workers and those living out the traditional farm life, watch Please Vote For Me which is a documentary that follows an elementary school class election.  You can see plenty of school footage along with the home life of average families in Wuhan, the capital of Hubei province.

A child of missionaries, Pearl Buck grew up in pre-Revolutionary China.  She has written many novels which take place in what we would think of as traditional China.  She is best known for her Nobel prize winning book The Good Earth which I absolutely couldn’t put down.  They really need to make a new movie version, though.

Amy Tan writes about a nearer historical time.  Her novels often juxtapose a mother who grew up in China but fled to the US after World War II and struggles in her relationship with her American daughter.  Both Tan and Buck include a lot of Chinese folk beliefs in their writing.

It is pretty easy to find various documentaries such as National Geographic’s Inside the Forbidden City or China: A Century of Revolution or the three party Mysterious China series on Marco Polo’s travels online or through a service like Netflix.

I’ve read over a dozen books on Christianity in China for a big research paper, but most are scholarly.  However, there is one that I would recommend for general audiences.  Bamboo Swaying in the Wind by Claudia Devaux, who writes on behalf of Fr. Wong, is the memoir of a Cantonese Jesuit who spent decades in prison and at a work camp.

Wild Swans–  This is the story of three generations of women that span pre-revolutionary China to the 1980s.  It is a real page-turner, but will help you to understand the various movements that occurred within the Communist era.  It really helps you to understand the turmoil which went on for decades within China.

If you read Wild Swans, read this article as a follow up to see the contrast between those born after 1980 and those who lived through all of the Communist era conflict and hardship.

Tombstone:  The Great Chinese Famine is on my To Read list.

Oracle Bones is another book by Peter Hessler which sort of straddles the line between history and modern life.  I haven’t finished it yet, so I will add more when I have finished it.