Someone mentioned my blog today and I realized it has been a month since I last updated. I took some time to read over the old entries and it was great to remember the trip to China. But when I look back, Leo was such a stranger. Now I know him so well. At the two month mark, we have definitely reached the settled in point. Leo has continued to blossom. He loves everyone in the family, and he seems to learn new things every day. 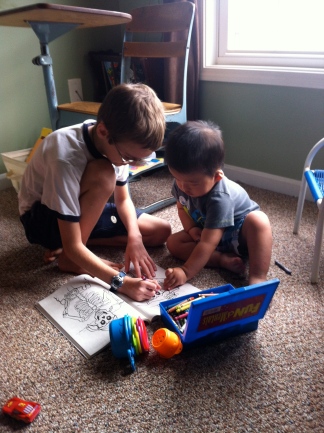 This month we were able to get Leo evaluated for early intervention through the First Steps program. We will have weekly visits to help get him caught up from his orphanage delays. He is very curious, and I love watching him practice new things he has learned, such as how to color. He was so confused the first time I read him a book, but now he will bring me board books to read. He especially loves stories where I make animal noises for him.

Speech therapy is one service that will be provided by First Steps. Leo seems to have forgotten his Chinese. He no longer says Chinese phrases like “wa wa” for baby nor does he show any recognition if we use a Chinese phrase. But he hasn’t started speaking much English. For a while he really only said Mama which is the same in Chinese and English. He calls both me and Matt “mama.” But last week he seemed ready to start trying new words. He has said hi, bye, cat, and doggie several times. He also will say Max, but that is his only sibling name. 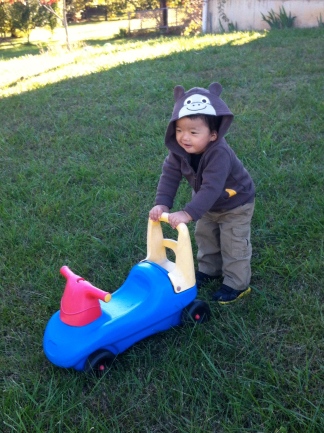 I looked over my last entry about what our life was like, and I see so many changes since then. No one has been sick for awhile and that really helps! Leo no longer cries before he goes to sleep. He is still a picky eater. Matt is still his favorite parent, but I have seen a big change in our relationship. He has figured out that I’m not just the house nanny, and he will smile when he sees me, and spontaneously give me hugs and kisses. He is still scared of the dogs, but he is getting used to them. It’s getting too cold to keep them outside, so he’ll have to get used to them being inside soon! While he is still withdrawn and fearful when we go new places or he meets new people, he has come a long way in feeling more secure and trying new things. For example, he had never really been exposed to grass in China since he lived in an institutional and urban environment. Grass feels really funny if you aren’t used to it! It took a few weeks, but he has started to venture out in the grass now.

I can tell that he is feeling most comfortable that he knows what is going on in his life. The first week when I tried to do laundry it was difficult because he cried when I set him down to pick up the laundry basket, and I couldn’t figure out how to carry both him and the basket. Now when I go to the laundry room he runs ahead of me while I carry the basket to my room to fold the clothes. When I say it’s time for a diaper change, he runs to the changing pad. He has started to tug at the door when he wants to go outside or the refrigerator door when he wants a drink or snack. He likes to show us that he knows where things belong. I have a spot on the counter for the children to keep their cups so we don’t dirty up 5274 cups each day. Sometimes I will walk by and see Leo has parked his sippy cup right there in the line. Another day when I couldn’t find his shoes, Matt told me that Leo has started putting them in our closet with the rest of our shoes. Because he knows that’s where shoes belong. 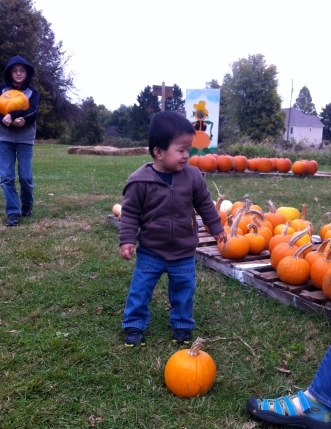 We missed out on most of the first two years of Leo’s life, and many people are hesitant about adoption because you miss so many of the “firsts.” The first smile, first tooth, first step. But there are still so many firsts left to enjoy. I can assure you that I was just as excited when Leo took those first steps on the grass as I was when any of my first four children took their first steps! This month we have enjoyed so many firsts with Leo. In October he enjoyed eating pumpkin muffins, drinking cider, wearing his first Halloween costume, and picking out his first pumpkin. It was great to be over jet lag, take a break from the various medical appointments, and enjoy life together. It’s also wonderful to see how excited the other children are to share in these moments. Oh, and I can’t forget to add our first photo session as a family of seven! 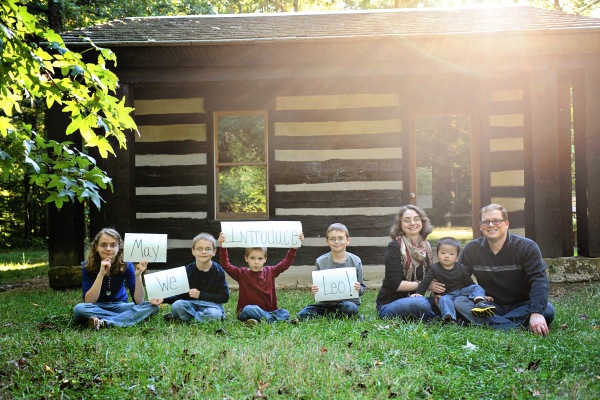 Another special milestone this month was Leo’s baptism. He is much too big for the gown that all our children have worn, so I bought him a traditional Chinese outfit when we were in Guangzhou. We had planned to have him baptized next month on the feast day of St. Leo the Great, which falls on a Sunday this year. 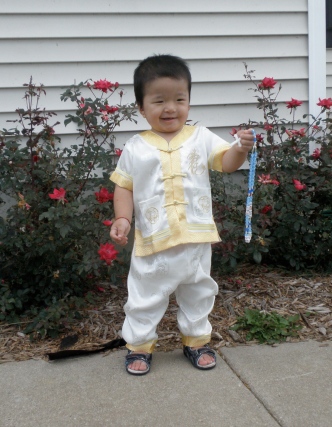 Unfortunately, after his surgery was scheduled it fell just two days later so we moved the baptism date to an earlier weekend. Leo’s cleft palate will be repaired this Friday, November 8th. His cleft is considered minor, but as his surgeon said, it won’t feel minor to Leo. We were able to schedule a few other things to be done at the same time so he won’t have to be sedated again. For example, he came to us with a front tooth that was crumbling from decay, so the stub of the tooth will be removed. Please keep him in your prayers for a smooth surgery and quick recovery.