I thought 16 days in China would be a really long trip, but I’m sad that it’s time to leave. We have truly enjoyed our days here, and I wish that China were closer so visiting regularly would be an option.

This morning we visited the tomb of the Nanyue king. This was an ancient king who ruled over a small kingdom here in the south of China before an Emperor began to rule most of the country. The tomb museum is on the same block as our hotel, and I have heard from many people that the tomb was found when they were building the hotel, so they had to move the hotel site.

The museum was large, modern, and air-conditioned which is something that we really appreciate in this sweltering city. They had a large collection of ceramic pillows. They looked quite beautiful, but not especially comfortable. We saw many artifacts which were uncovered in the tomb, as well as the king’s jade burial suit. The suit was made of many small tiles of jade, sewn together with red silk thread. There were also many jade discs buried on and under the body. 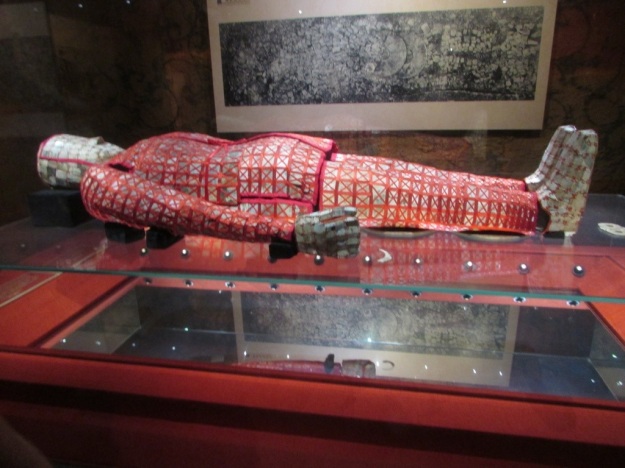 The best part of the museum was that they had preserved the burial site. There are no artifacts remaining, but we could walk down into the tomb and through the rooms. You could even see traces of painting on some of the walls. Mary Evelyn said the museum was well worth the $2 admission charge.

We spent nap time packing up our suitcases, then we went for one last walk in Yuexiu Park. After supper, Linda and I walked down my favorite traditional street one last time while she looked for a few more souvenirs to buy. It’s an early bedtime for everyone tonight since we have to be in the van on the way to the airport at 5 am. We should land at our home airport around 7:30 pm the same day, despite traveling for over 20 hours.

4 thoughts on “Last day in China”