Monday was another free day for us, but we will be busy tomorrow. We basically did the same thing today as we did yesterday. We had made plans to go to the Guangzhou Safari Park with another family, but decided to stay close to the hotel after all. Leo does not like the heat, and the Safari Park is more of an all day event. After breakfast we decided to visit the other park near the hotel, Yuexiu Park. Yuexiu Park is so huge that I printed off an extra page from google maps to be able to get most of it on a page. I think it’s Guangzhou’s version of Central Park. Yuexiu Park is home to Guangzhou’s famous five goat statue. 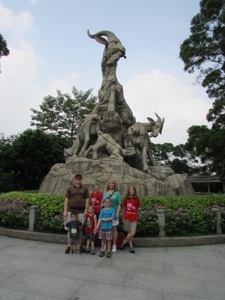 Legend has it that five deities came to Guangzhou riding on five goats, and they blessed Guangdong Province with a wonderful climate that insured plentiful harvests for the people who live here. You see the five goats statue everywhere as a symbol of the city. This park was different from yesterday’s park but we enjoyed it as well. Yuexiu is very much like walking through the zoo’s rainforest climate biosphere, only you never get to leave the biosphere.

We came back to the hotel for a light lunch and nap for Leo. We headed out to walk in the neighborhood we had eaten at on Sunday to look for an early supper. We found a large restaurant this time, and they had a menu that was written in English for us, but no pictures. I decided that the picture menu is better, because I’d rather not know what all my options are. There were regular exotic fare such as snails or eel, along with pretty much all of the pig–feet, ears, offal. I was just thinking that pig offal was a mistranslation of intestines until I turned the page and saw cow intestines offered as well. We picked some items that were safe to eat and had a good supper.

I don’t think I’ve mentioned before, but the tap water in China is not drinkable. Apparently their pipes are old, and sometimes sewage seeps in. So when we eat out, we can’t order water because you don’t know if they will be serving tap water or not. You can request bottled water, but restaurants offer name brand Evian instead of Chinese bottled water, so it is about three times the cost of soda. We order soda and usually it is served European style, that is warm with no free refills. It’s nice when they keep the cans or bottles in a refrigerator and we can drink it cold. Occasionally it is served with ice, which we really shouldn’t have because we don’t know if they’ve made it from tap water or not. So far the time or two we’ve had ice, we just try to drink the Coke quickly enough that the ice doesn’t melt. Restaurants do not keep western style utensils around, so it’s chopsticks or large soup spoons. I try to pack a long a couple of plastic forks for the younger two, who haven’t quite mastered chopsticks yet. Finally, while it isn’t as annoying as the national habit of hand-washing without soap, one thing that I dislike about Chinese restaurants is that half the time they don’t provide any napkins. If they do, the Chinese style napkins are basically a box of tissues. If someone happens to spill a drink then you have to use up half a box!

After we finished eating we stopped into a large Chinese bakery. They had lots of western desserts and many interesting cakes. We bought some bread and a few samples of desserts to try back at the hotel. Then we went swimming in the evening. Leo loved the water again. It turned to be a sort of boy adoption pool party as we were joined by three other couples adopting boys. Two Spanish speaking couples were adopting boys who were under 18 months, and then there was another American couple with a son about Leo’s age. 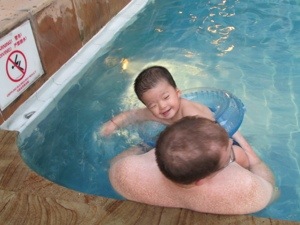 We have just three days left in China, and we are starting to be ready to get back home. We have really loved our time here, but we are getting very tired of living in a hotel! Earlier today Matt wanted something to eat but he was tired of the granola bars and other easy to pack food that we had in the room. He remembered that the hotel convenience store had some cans of Campbell’s soup so he decided to go buy one of those. He got down to the store and saw that his choices were oxtail soup and borscht. He bought the oxtail soup, but saw that it wasn’t a pull-top lid. He stopped by the front desk to ask if the hotel had a can-opener that he could use. They told him to call the help line from his room and housekeeping could bring one up. He went upstairs and called the help line. The nice lady didn’t understand the world “can-opener.” Matt googled the Chinese word for can-opener. She said she would send someone right up. A few minutes later a uniformed staff person knocked on the door. He requested the can, and then said he would be back in a few minutes, and left with the can. Five minutes later, Matt finally had an open can of oxtail soup. It was tasty, but I’m not sure anything would be worth all that trouble!