We had today free, and we enjoyed being able to sleep in and have a leisurely breakfast. After breakfast we decided to go to one of the two large parks that are nearby the hotel. It isn’t oppressively hot out but it is very humid. It feels like a steamy bathroom after a shower out there. As we walked the short distance to the park, we saw several people who had set out wares on blankets to try and interest the tourists from the two large hotels. 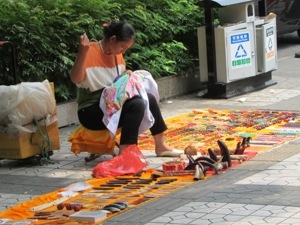 Liuhua park was beautiful. On the map it looked like a park with a series of lakes. On the ground, it looked like one huge lake with many walkways across and around it. There was a huge marble building right in the center, but somehow we never made it to that building. I think you can tell from this picture that we’re all starting to get tired of smiling for pictures in front of interesting landmarks. 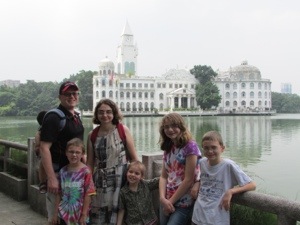 We saw all kinds of interesting things. There were many people fishing from the banks, and one guy who set up an elaborate net and pulled fish into a boat. There was an exercise area that was packed with people young to old using the equipment. People were playing instruments, and badminton. There was a ladies fan-dancing class and rental paddle boats. We found one building that we could enter and it was had a display of local artists’ work. 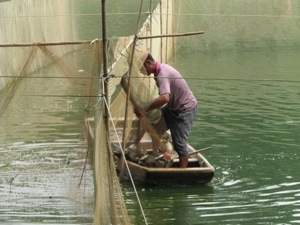 We enjoyed the walk but we were hot and tired when we got back to the hotel. We had a light lunch and put Leo down for his nap. After he woke up, we decided to go swimming at the hotel pool. It is outdoors on the fourth floor, and it was perfect weather for a swim. I didn’t take the camera because I assumed that Leo would just cry and cling to Matt, but I was completely wrong, so I’ll take the camera next time. He was a little hesitant at first, but then the he had a lot of fun. He was splashing and laughing. He even let me hold him a little at the end. We swam for close to two hours, and then decided to just order Papa Johns for supper. The Chinese don’t eat much dairy and they usually think American melted cheese food is gross, so I was also surprised when Leo loved the pizza and ate a slice and a half. 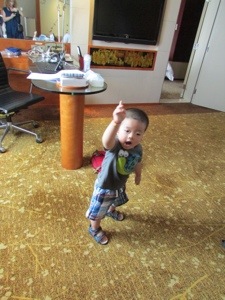 Other than still being suspicious of me, he’s still doing very well. He hasn’t had any more grieving times since we visited his orphanage. He sleeps well at night and takes a long nap. He spends time playing with the other children every day. He still thinks Mary Evelyn is special. He laughs and runs over to Matt when he sees him put on the ergo carrier. He’s a happy little guy, just like Director Chen said. We think we’re pretty lucky to have him!